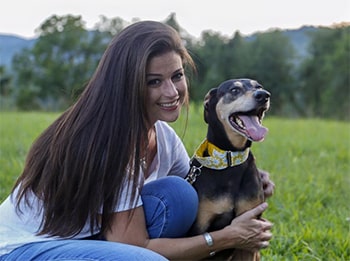 In many cases, canine behavior problems in adult dogs can be traced to their development during their first months of life. Canine behavior issues are often rooted in fear, with anxious responses and even aggressive behavior learned as ways to respond to given situations. Those responses are commonly developed during puppyhood when a dog learns through negative experiences, or even a lack of experience, what is safe and what is dangerous.

Poor manners also can take root in puppyhood, as young dogs learn through trial and error that certain behaviors, like barking or jumping up, garner desirable results, like attention. Many learned behavioral responses gain strength with practice and repetition, becoming more resistant to change the longer the dog rehearses them.

As an animal trainer working with puppies, I’ve found there are five areas of particular concern that owners should address during the early months of a dog’s life, rather than waiting to fix them in adulthood, to best ensure a lifetime of behavioral well-being.

The more socialized and well-adjusted a dog is to various sights, sounds, smells and tactile stimuli, the less likely the animal will react in fear or aggression. The most critical learning period is from about 6-14 weeks of age, during which time dogs are the most receptive to altering their perception of and reaction to the world around them.

It can be damaging to do nothing during a puppy’s socialization period because he learns through experience whether a situation is safe. Those things that are unknown are often categorized and responded to as dangerous, as it’s less costly for a dog to react to a non-dangerous situation than to not react to a situation that really is dangerous. If a puppy has a limited or isolated environment or has gone through negative experiences in which he learned a certain situation is unsafe and best avoided, he is likely to develop anxious and defensive behavior.

During socialization, puppies should be introduced to various environments, situations and stimuli they may encounter in life, such as riding in the car or visiting the veterinarian, groomer or kennel, pairing the event with rewards like treats or toys. Social relationships with people, other dogs and other household animals such as cats should also be honed through positive experiences during the early learning period. Social learning helps a puppy better communicate and understand body signaling, develop play behavior and even learn to be careful with how he uses his teeth.

Socialization is of paramount importance for puppies above all other training, including basic manners, because it impacts a dog’s behavior and confidence for his entire lifetime.

Build a puppy’s confidence with touch and restraint to prevent fear-based reactions that may otherwise occur. Pair the handling with rewards the dog enjoys, like licks of peanut butter from a spoon or treats delivered in fast succession. Accustom puppies to having more sensitive areas touched, such as paws, ears, muzzle, tail and legs. Also practice various types of petting and handling, including patting, massaging, poking, gentle restraint and lifting.

Nail trims are one procedure that can trigger panic in many dogs. Prevent nail trims from becoming an issue for your dog by doing lower-stress trims yourself or finding a professional who clips nails using gentle handling paired with rewards.

Many dogs innately guard treasured items from animals and sometimes even people who they perceive may take away their valuables. Items that dogs guard include food, treats, chews, toys, resting places or even seemingly unimportant items like empty wrappers and tissues. Teach your puppy early to willingly give up items when asked by training the “drop it” behavior. Start with low-value items and move up in value as the dog stays relaxed and reliably drops the item when asked. Also train your dog to associate the presence of people passing or approaching when he has a possession with something desirable happening, such as treats being tossed by his food bowl or resting place. If a puppy or dog shows aggression around prized items, seek immediate professional help, such as a veterinarian working with a positive-reinforcement trainer.

Whatever you allow a puppy to do, he’s likely to do as an adult. For that reason, all behaviors your puppy does with you and others should be permissible when he’s fully grown. If behaviors like jumping up, pulling on the leash, barking for attention and jumping on furniture are allowed during puppyhood, they are likely to remain and be habits when the dog is an adult. Though accepted in a 10-pound puppy, those canine behaviors may not be as well-tolerated from an 80-pound adult. Place boundaries on your puppy that will be in place when he is fully grown, such as having four paws on the floor when greeting, to prevent problem behaviors from being rewarded and rehearsed into habit.

Get Your Puppy Used to Separation

Train your puppy early to be OK when separated and alone. Canines can develop an over-reliance on people, especially when first brought home and smothered with constant attention. It’s a rude awakening for a puppy when his family’s schedule changes or attention gravitates elsewhere and he has never been taught to be OK by himself. One safeguard against dogs becoming stressed during separation is to teach puppies from an early age to relax when left alone and even associate alone time with good things happening.

By paying attention to these canine behaviors and principles when your dog is a puppy, you’ll give yourself the best chance of minimizing problems — and maximizing enjoyment — when he is an adult.