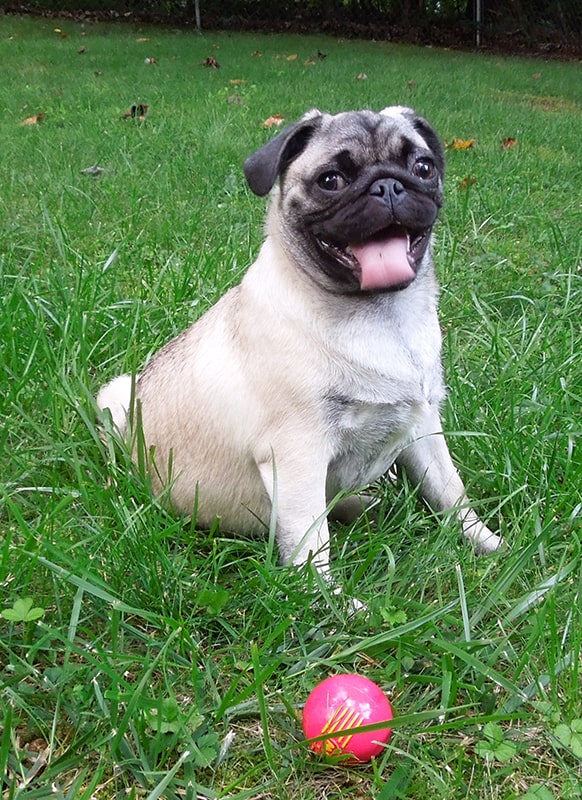 Every dog lover has had the experience: You explain that Fluffy only plays with the red ball, and someone says “Oh, well, she can’t see color. It must be because of the smell.” It is a common myth that dogs are only able to see shades of gray, but the truth is that dogs are able to see a variety of colors, just not as many colors as you can see.

Human and dog eyes both have cones: special light-catching cells that respond to color. There is a variety of types of cones which work together to allow humans to see all waves of the color spectrum. It is generally accepted that humans have three types of cones, while dogs only have two.

Humans that are classified as colorblind are missing one of the three cones working to allow us to view color. They can still see some colors, but not as many as those with more types of cones. They may also have difficulty discerning between colors, such as red, green, and yellow. While this does not mimic canine vision, it may be helpful in understanding what dogs see.

In a study done by Jay Neitz and other researchers at the University of California at Santa Barbara found that domestic dogs are able to differentiate between some colors. Dogs were tested by showing three separate panels of color, two panels of the same color in each test, and one panel of a different color. The dogs were then asked identify the different color and were rewarded with treats when they did so.

It’s a commonly held belief that dogs may not be able to distinguish between yellow, red, orange, and green. Ironically, the most frequently purchased dog toy color is actually red! A red ball lying on the grass may blend in and be hard for your dog to see. You may have noticed that our dog sniffs around to find their toys – she has a very strong sense of smell, and she can “see” the object with her nose. Some trainers think dogs enjoy hunting for their toys – a popular game for many dogs is “hide and seek”, and it is possible that Fluffy actually prefers to search for the toy, meaning that the red ball that blends into the grass is more fun to look for than a ball see can easily see.

So you dog really CAN have a favorite color – it just might not be their favorite for the reason you think.