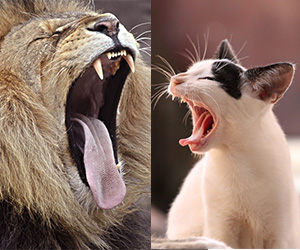 August 10 is World Lion Day, dedicated to raising awareness of the conservation issues affecting lions in the wild. Big cats appeal to us in large part because they have similarities to pet cats. In fact, there are significant ways in which lions are more similar to domestic cats than other wild felines, but there are some interesting differences, too. We spoke to John Bradshaw, author of the book Cat Sense, about how your cat is — and is not — like a lion.

There are only two cat species in which the females raise their young together: the lion and the domestic cat, Bradshaw says. Lions live in prides where the females care for their cubs together. Similarly, when cats are living outdoors on their own, three or four females will put their kittens in one nest that they all defend. The mother cats will also go out hunting and bring back food that they allow all of the kittens to eat. Breeders and rescuers can make use of this behavior by putting orphaned kittens or those whose mothers are short of milk with another nursing female. “What they’re taking advantage of is the fact that mother cats basically don’t seem to recognize their own kittens, which is unusual,” Bradshaw says.

However, the social lives of domestic cats and lions differ on the male side. “In lions, the males also cooperate,” Bradshaw says. “It’s virtually unheard of for male domestic cats to cooperate.” Although we think of there being one male lion in charge, Bradshaw says that actually a pride includes a group of males, usually closely related to each other but not to the females. “The reason they are in a group is to defend those females from other groups of males,” he says. That defense is important to the survival of the pride; when a new group of males takes over, Bradshaw says, “the first thing they do is kill all the cubs. [The new males] know they’re not theirs, because they’ve only just arrived, and they want to get the females breeding again as soon as possible so they can produce offspring of their own.”

For big cats, that social cooperation extends to hunting as well: Though domestic cats hunt alone, lions usually hunt together. “It’s mostly the females that do it,” Bradshaw says, “and the males kind of tag along and take the best bits after the females have done all the work.” According to Bradshaw, those different hunting styles are connected to the different kinds of prey that domestic cats and lions eat. “The reason that lions can afford to be sociable is that they have the ability to hunt very large animals that will feed several lions for a day or two,” he says. Domestic cats likely never evolved cooperative hunting because of their small size — even in groups they couldn’t compete with larger predators, so they stuck with the solo hunting of small prey.

We may think of lions as diurnal — they’re always shown being active during the day on nature shows — while domestic cats certainly seem annoyingly nocturnal when they’re knocking stuff off your dresser at 2 a.m. That is more or less true, but neither feline is completely locked into a schedule. “Most cats are fairly flexible about whether they’re nocturnal or diurnal, because they’re adapting to their prey and the weather and the time of year,” Bradshaw explains.

But you can see their differing tendencies reflected in their anatomy. Large eyes are a clue that an animal hunts at night, and the cat’s eyes are much bigger in proportion to the head than the eyes of lions, which tend to hunt in daylight. “Cats descended from animals who tend to hunt at night,” Bradshaw says. “Lions do hunt and move around at night — people who go on safari will tell you that lions roar at night — but generally speaking [they] do most of their hunting during the day, and the way their vision is constructed tells you that.”

On the hand, there are also similarities between big and little cats. You know when your cat rubs its head on you? Lions do it, too — not to people, of course, but to each other. “It’s generally assumed there’s some scent being deposited, but the significance is not very well known,” Bradshaw says. You’ll see it when a lion returns to the group, and it seems to be a friendly greeting that reinforces the family bond. The gesture doesn’t occur in other felines except between kittens in a litter or between a kitten and its mother. “Most of this social behavior evolved from pieces of behavior that, in the rest of the cat family, are ways for mother and offspring to bond with one another,” he says.

Finally, both cats and lions love catnip, and they’re not alone. “Pretty much the whole cat family responds to catnip,” Bradshaw says. Some individual cats go crazy for the stuff, while others don’t react at all, and the same is true of lions — the sensitivity to it seems to be inherited more or less randomly. For the ones who do react, he says, both species exhibit exactly the same kind of behavior, “rolling over on the herb and seemingly going into a trance.”

Aside from their size, lions and cats are physically different in a few important ways. For one thing, lions roar and don’t purr; cats purr and can’t roar. That is because the anatomy in their throats is different. Although it’s so familiar, purring was long a scientific mystery. Once thought to be made by the blood rumbling in the chest, we now know the purr comes from the larynx, and close examination of a sonogram shows that there’s a subtle difference in the sound of the breath in and the breath out. Lions have an additional rigid structure in their throats that prevents purring but allows them to roar.

Like cats, the claws of lions are what people often call ” retractable,” although Bradshaw says that they’re more correctly called protractile: Their resting position is tucked in, and there are muscles that thrust them out when needed. Why? Compare them to another cat, the cheetah. “The cheetah is unusual because it’s a running animal, more like a dog,” Bradshaw says. “The claws can’t retract, so they wear down all the time.” Claws that stick out help with traction when running, but for lions and domestic cats, it’s important to keep their tools in good condition. “They keep them tucked in all the time because they use them in hunting and they need to keep them sharp,” he says.

Cats, lions and many other animals have what Bradshaw likes to call a “second nose.” That extra nose — the vomeronasal organ in the roof of the mouth — analyzes airborne chemicals much the way that the human nose does. If you’ve ever been mystified when your cat pauses and makes a funny face, you’re probably seeing what’s called the flehmen response, which happens when an animal is using that organ. But you may not have noticed it because it’s much less obvious in cats than in lions. “The whole top lip goes up and the teeth are exposed, and the lion almost goes into a trance,” he says, as you can see in this video. “Once you’ve seen it in a lion, it’s easier to recognize in your cat.”

Lions, domestic cats and all other felines are obligatory carnivores, relying on meat much more strictly than other families of carnivores. Pandas are descended from meat-eaters but eat only bamboo, while dogs are actually better at digesting grain than wolves are, a change that happened in the course of their domestication. “But both lions and domestic cats are locked into a meat-eating lifestyle,” Bradshaw says, suggesting that they may have a more limited ability to utilize certain plant material in their diet.

Because their digestive system and metabolism are unusual in that way, you can’t feed your cat a vegetarian diet, and, he says, “There couldn’t be a pacifist lion. A lion couldn’t put its hand up and say, ‘I’m not going to kill anymore, I’m going to eat grass.’ It simply doesn’t have the equipment in its body to do so.” Cats need so much protein that without it they quickly start to waste way. “If we’re short of protein, we just run on carbohydrates,” he says. “If you restrict the protein a cat or lion gets, all it can do is start digesting its own muscles. They cannot stop themselves from breaking down protein.”