Talking to Your Pet 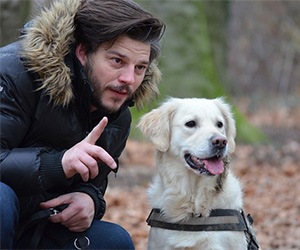 There’s no doubt that some animals can learn to understand some of what we say to them — look at Chaser the Border Collie, who’s been scientifically shown to know 1,000 words.

But that’s not what’s going on when most of us talk to our pets. I chatter away in full sentences to my Pugs, despite the fact that they have both gone deaf. I also talked to the zoo animals I used to care for, greeting them in the morning and scolding them for not finishing their meals.

What is it that we get out of talking to our pets? And what do the animals gain from it? We spoke with a few experts on dogs and humans to get some insight.

What Do Our Pets Get Out of Our Speeches?

Alexandra Horowitz, author of Inside of a Dog, does research into how dogs think, but she’s also interested in how people talk to them. She collects these one-sided conversations — like the owner overheard saying to his dog, “Last pee for a while, buddy,” before the recent snowstorm in New York — on her Twitter feed, with the hashtag #thingspplsaytotheirdogs.

Surely part of why we do this is that our dogs often react like they understand us, but most of our dogs are very different from Chaser or the service dogs who respond appropriately to many commands. “These dogs have experienced incredible numbers of repetitions of specific words by people speaking to them,” Horowitz says. “That’s not the way owners typically talk to their dogs.”

Ask any dog trainer and she’ll tell you that most of us, even when we think we’ve taught a command, haven’t done a thorough enough job of repetition and training in different situations. But even if our dogs do come to recognize individual words, they don’t understand the ever-changing nature of sentence structure.

“Even the most skilled police dog, who can do incredible things if you say, “Go find!” won’t know how to respond if you say, suddenly, “Go circle!” she says.

So when Horowitz overheard a woman saying, “No, that isn’t food. No, I mean, that isn’t food for you,” we can be sure her dog didn’t get the difference between those two sentences. However, if she spoke in a stern voice, the dog probably got at least part of the intended message.

It seems obvious to most people that dogs pick up on the emotions conveyed in our tone of voice. But what we think is obvious doesn’t always turn out to be true when scientists do the research. For instance, that guilty look doesn’t mean what you think it does.

In the case of our tone of voice, though, the science backs us up. Emily Bray is a graduate student in animal learning at the University of Pennsylvania who’s worked with Brian Hare of the Canine Cognition Center at Duke University on how dogs of different temperaments respond to intonation cues. She says that many studies have shown that a dog’s behavior is affected by whether a person speaks in a friendly tone or an intimidating one. For example, dogs may understand what a pointing gesture means, but their reactions change depending on how an experimenter speaks to them.

“If you use the informative voice when you point, they go and search where you’re pointing,” she says. “Whereas if you say something in the imperative voice, they’re more likely to just sit down, even though it’s the same gesture.”

It’s actually not at all surprising that dogs understand our tone of voice, because, in fact, there’s nothing special about the way humans convey emotion — we do it the same way as our fellow mammals. “There’s this idea called Morton’s Law,” Bray says. “Across mammals, high-pitched tones are generally associated with affiliative behavior, and low-pitched tones are associated with threatening behavior.”

So when you talk that squeaky baby talk to your pet, he’s probably getting exactly the affectionate message you’re intending. Similarly, animals — including us — use short, repeated vocalizations when excited. In fact, one difference between experienced dog trainers and the rest of us is that trainers are better at using intonation to communicate effectively.

What Do We Get Out of It?

So dogs do get some information from our speech, but they’re definitely not getting the full details of the long conversations that some of us have with them. So why do we do it? I often joke that it’s a great idea to have pets if you like to talk to yourself, and Horowitz has observed that a lot of what’s going on is that we’re simply narrating what’s happening in our heads.

But there’s more to it than that, and it’s because sometimes dogs, at least, do pay attention in ways that matter to us.

Therapist Tiffany Craig says it’s often easier for clients to talk to her “assistant” Dante, a Lhasapoo. She remembers one teenager who wouldn’t talk to her and would only scream at her mother, but she would talk to Dante. “Then she opened back up to me, and we were able to talk through what was going on,” she says. “That happens a lot.”

Why? Partly it’s just that dogs are good listeners. For one thing, they’re interacting in a way that we understand. “Dogs don’t look each other in the eye. It’s impertinent in the dog world,” she says. “But they’ve learned to look us in the eye because that’s what humans do.”

Another aspect of it, though, is what animals don’t do. For one thing, they don’t interrupt to tell you their story. “Talking to people can be helpful, but often people are listening solely with the expectation that when you stop talking they can begin,” therapist Allen Wagner says. And what you say to a pet stays with the pet. “Not all people have close people in their lives they trust, and confidentiality with your dog or cat is a given,” he says.

Also, your pet is always on your side — or if he’s not, at least he doesn’t say so. “Dogs never say stupid stuff,” Craig says. “Dogs never invalidate your feelings; they don’t tell you you’re crazy; they don’t judge you.”

So there are clearly reasons we might get psychological benefits from talking to our pets. But can it go too far? When she considers whether a behavior is a problem, Craig says, “What I ask is, is it functional or dysfunctional in your particular environment?”

Having whole conversations with your dog on the street may annoy passers-by (and you might end up quoted in Horowitz’s Twitter feed), but as long as it’s not affecting your relationships with others, Craig thinks it’s not a problem.

“In my opinion, the line is, how much is it impeding or impairing your life? If somebody is living alone with a critter and they talk to that dog or cat all the time, if it’s not hurting anybody else, who cares?” she says. “But if that person has four other people in the house and won’t talk to any of them and will talk only to the cat, now we have a dysfunction.”

But what about my talking to the zoo animals who didn’t respond the way a dog or cat does? Is that crossing the line? Craig suggests that another reason we talk to animals is simply that we’re obeying the deep-seated social instincts of our species.

“If those giraffes were humans and you gave them their food and walked away without saying anything, it would be incredibly rude,” she says. “It violates our own social expectations. You don’t want to be a rude person.”

And, after all, consider the audience. “I wouldn’t want to be rude to a lion,” she says. “That’s just stupid.”